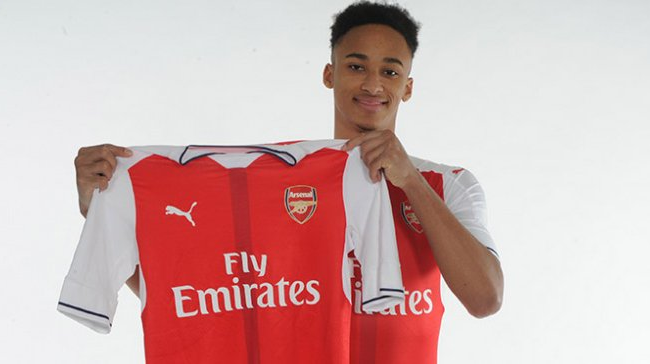 Arsene Wenger has once again sought to pluck a diamond on the rough by procuring Cohen Bramall from non-league Hednesford Town, who he signed for just five months ago.

The 20-year-old, who had previously been on trial with Crystal Palace, has today left the Northern League Premier Division to join the Gunners’ Under-23 side.

Indeed, it’s been something of a whirlwind for young Bramall, who spent last season playing with Market Drayton in the eighth tier of English football.

In his first interview with the Arsenal website, the promising full-back described his latest career move as “mental” before taking us all through his “crazy, crazy week”:

Well I played for Hednesford Town and I had been there for about five months.

The manager, Liam McDonald, really took me on […] He gave me all the confidence that I needed and teams were getting interested.

My confidence was getting bigger and bigger, and then I signed with an agency called Full Contact… It’s a great agency with a lot of non-league talent there, so credit to them on that.

Crystal Palace came in for me and I went on trial with them for the week, and I played in a behind-closed-doors game against Brentford. It went okay, and then I went on trial at Sheffield Wednesday.

I played a game at Birmingham City on a Monday. Then on the Tuesday, I was made redundant from Bentley Motors and on the Wednesday, Arsenal came in.

I was gobsmacked and took the chance with both hands. I drove down on the Wednesday and trained with the first team on Thursday and Friday.

Then they offered me a deal.

What a nifty little story, and nice to see the big boys still keep tabs on the non-league. Perhaps the schism between the echelons isn’t quite as gaping as it seems.

Welcome to the big time, kid!