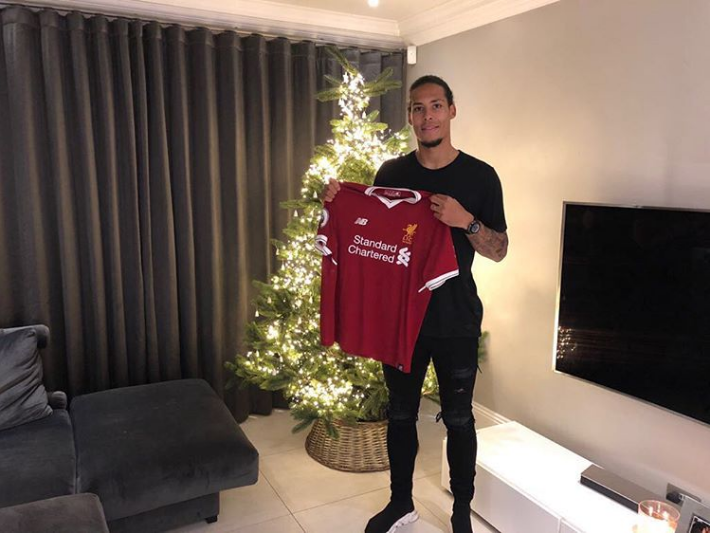 Liverpool have given Jurgen Klopp a rather expensive Christmas present, in the strapping form of Southampton centre-half Virgin van Dijk.

The 26-year-old will join the Reds when the transfer window re-opens on January 1st, in a whopping £75million deal, a world-record deal for a defender which eclipses the £52million Manchester City paid for Benjamin Mendy in the summer.

Van Dijk had been expected to move to Anfield for a significantly smaller fee of £60million last summer. However, that deal never materialised with Liverpool forced to apologise for making an alleged illegal approach for the player.

On finalising the deal, the Dutch international shared a festive photo of himself on Instagram, in front of a Christmas tree, holding a Liverpool jersey.

Today is a proud day for me and my family as I join one of the biggest clubs in world football!

I can’t wait to pull on the famous red shirt for the first time in front of the Kop and will give everything I have to try and help this great club achieve something special in the years to come.

Van Dijk had also been linked with a move to Manchester City, with reports suggesting that City refused to meet Southampton’s hefty valuation of the player.

Saints will no doubt now look to reinvest the money in January in an attempt to kickstart their disappointing campaign.

Former club Celtic, who sold the defender to Southampton in 2015 for just £13million, will themselves benefit from the move, courtesy of a 10% sell-on agreement.

As for Liverpool, they finally get their man, who becomes the latest ex-Saint to swap the south coast for Merseyside, following in the footsteps of Adam Lallana, Dejan Lovren, Nathaniel Clyne, Sadio Mané and, in a roundabout way, Alex Oxlade-Chamberlain.

While the potent Reds haven’t been short of goals this season, their defensive frailties have continued to blight their hopes of launching a genuine title tilt.

Klopp and co. will be hoping that Van Dijk, who will wear the No.4 shirt, will prove to be the final piece in the defensive puzzle for the Merseysiders.