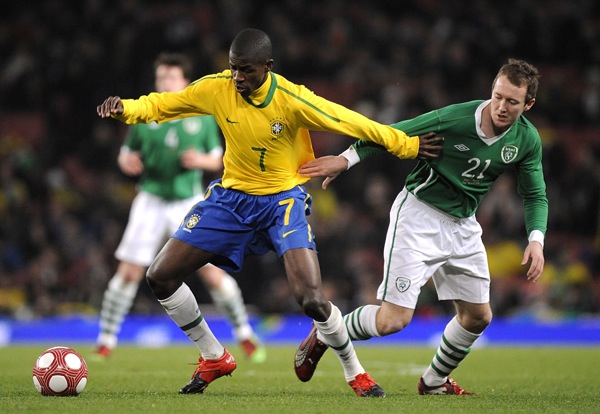 Chelsea are closing in on the signing of young Brazil star Ramires. A deal for the highly rated Benfica midfielder should be signed and sealed by the end of the week, subject to a medical.

With Yossi Benayoun in for Joe Cole, Ramires would fill the Michael Ballack-shaped hole at the Bridge, even if he’s more of a destructive midfielder than the German.

The fee? Reports claim Chelsea will pay as much as £17m for the 23-year-old but I doubt it would take quite that much to persuade Benfica to sell.

There is a catch: Ramires is part-owned by businessman Kia Joorabchian (yes, him again) and Chelsea would have to strike a deal that complies with the Premier League rules, which outlaw third-party ownership of players.

Benfica president Luis Felipe Vieira said: “Ramires staying at Benfica does not depend solely on us. We have a partner and we must respect the contracts.”

From what I saw of Ramires at the World Cup, Chelsea are onto a winner here. I thought he looked a triffic player, and pretty much the complete central midfielder in the making.

So, Chelsea for the title again? Yeah, looks that way.