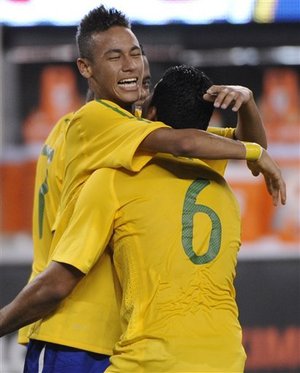 We hear on the footballvine that Brazilian wunderkind Neymar IS coming to Chelsea after all.

Chelsea’s chief scout, Michael Emenalo, watched the 18-year-old forward score in Brazil’s 2-0 win over the USA on Tuesday, and has since convinced Abramolotti to pay Santos in the region of £20m.

This just in from Goal (which, for all the sh*t it hurls at the fan, sometimes gets it right):

“Folha de Sao Paulo claims that in a meeting held in New York the decision to allow the Brazilian international striker to leave Santos was finalised.

“It’s been reported that the meeting was held in the presence of the player, his father, agent Wagner Ribeiro, Santos president Luiz Alvaro de Oliveira Ribeiro, Chelsea chairman Bruce Buck and agent Pini Zahavi. Neymar agreed to sign for the Blues, who will pay Santos €25 million (£20.7m).”

Well, Zahavi did sit next to Emenalo at the Brazil-USA game, so I sort of believe this will actually happen.

Neymar plus Ramires means Chelsea will have signed up two of the biggest young stars in South America. Nice work.