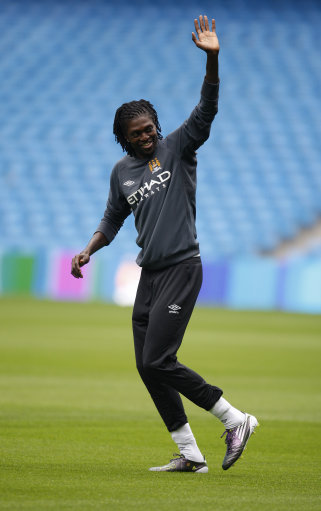 MANCHESTER City’s big sky-blue meat grinder has apparently claimed another victim with striker Emmanuel Adebayor now admitting that he may have to leave the club during the next few days if assurances over his Eastlands future are not forthcoming.

Adebayor returned to the City first-string for last night’s Europa League victory over Timisoara, but is fully expected to return to the bench for Sunday’s Premier League clash with Sunderland – especially if Mario Balotelli manages to shrug off his knee problem in time.

“The season is going to be very long and very difficult for myself. I’m a footballer and have to keep going and not give up. I need to keep fighting for myself and enjoying my football.

If you’re in a team and you’re not playing, and there is a team that comes in for me, then I will definitely be on my way out because I’m a footballer and I love playing.

So if I don’t have a chance to play here there will be a lot of chance to play somewhere else. If [City] force you out then you always have to follow your destiny.”

Forgive my pessimism, but can anyone else see this depressingly repetitive ‘join City as a superstar, leave as a frustrated benchwarmer’ pattern continuing until the sun finally burns out?