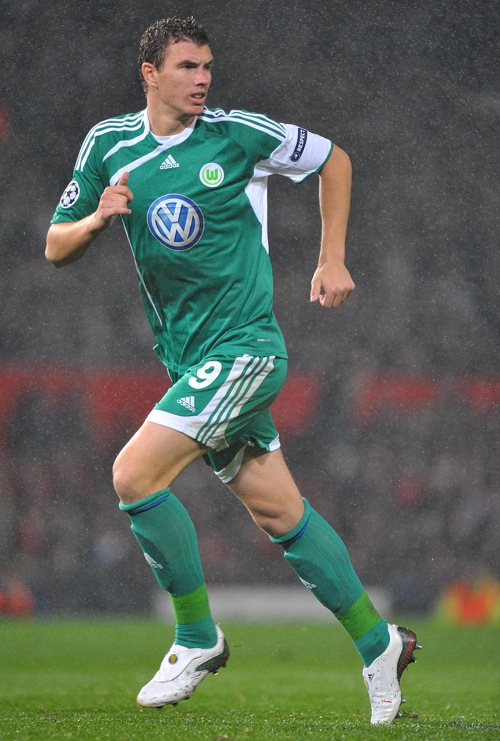 Edin Dzeko: Desirable to all

The Guardian’s Barney Ronay captured best the ubiquity of Edin Dzeko, in a superb piece about the January transfer window:

“The player who is suddenly everywhere will, once again, be everywhere. There is already a front-runner here in Wolfsburg’s Edin Dzeko. The urge to say his name a lot has already become irresistible. In-demand targetman Edin Dzeko. Want-away Bosnian Edin Dzeko. Hulking goal-sniffer Edin Dzeko. This is all part of the intoxication of repetition, a consumer frenzy engineered in other fields through repeated use of phrases such as ‘original period features’. Suddenly Edin Dzeko seems to be the answer to all things. Edin Dzeko. Tall, Bosnian, unsettled. You want to say it out loud. Go on. Edin Dzeko.”

But Dzeko will no longer be talked about quite so much, as he’s off to Manchester City – of course he is. According to City gaffer Bob Mancini, Dzeko’s current club Wolfsburg have agreed a fee for the rather large striker. (The fee is reported to be as much as £30m, which is obviously a hell of a lot for a player of Dzeko’s standing.)

“We have an important game at Arsenal coming up and I will speak about him after that,” said Mancini about Dzeko’s imminent move to Eastlands, his Italian lilt muffled only by a City scarf.

“We’ve agreed a fee. He’s a good player and all the teams in Europe want him.”

What does this mean for unloved/unlovable Emmanuel Adebayor? It probably means that Ade’s agent is negotiating a move to Serie A/La Liga as I write. It appears that Jose Mourinho is keen to bring Adebayor to Real Madrid on loan, so we’ll see how that pans out.

Tevez/Dzeko/Balotelli: that’s an appealing mix of attacking options for City – and at least Dzeko doesn’t seem the boat-rocking type, unlike so many of his prospective new team-mates. Now all they need is to offload Jo (not quite good enough) and bring back Craig Bellamy.