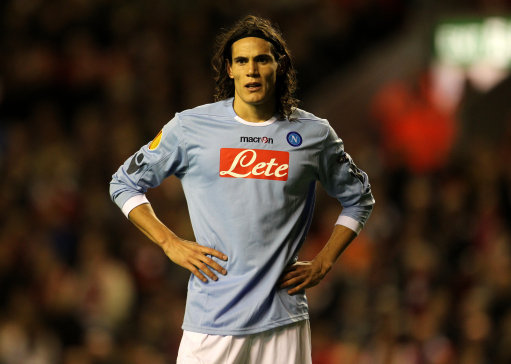 Napoli hitman Edinson Cavani will NOT be joining Manchester City (or anyone else for that matter) any time soon, with his agent rejecting outright any speculation that his client may be on the verge of a big money move away from the Stadio San Paolo.

Speaking to the absolutely awful-sounding Radio Kiss Kiss, Cavani’s representative Claudio Anellucci insisted that the Uruguayan forward is perfectly happy where he is:

“The [rumoured] offers? Everything is ridiculous. These rumours, in addition to being absolutely groundless, are useful only to destabilise the player and the environment. Cavani, I repeat, wants Napoli and Napoli want Cavani. Nothing more.”

Anellucci’s claims were then backed up by Napoli president Aurelio De Laurentiis who, after watching Cavani bag his 18th, 19th and 20th goals of the season against Juventus on Sunday, is understandably keen to hold on to his prize-asset:

“I wouldn’t even sell him for €50 million. I would say ‘no’ if Manchester City wanted him.”

I still get the feeling that an offer of around €50 million may change all that though. Cavani may be good, but he sure-as-sh*t isn’t that good.