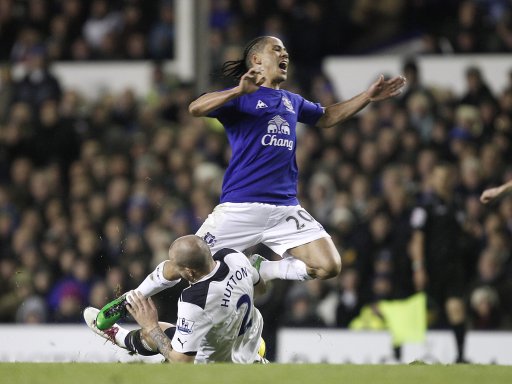 Despite being repeatedly linked to the guy for the last geologic period or so, Tottenham manager Harry Redknapp has conceded that his pursuit of Everton winger Steven Pienaar is now doomed to end in failure, after Chelsea gazumped his unsuccessful £2 million bid for the South African international by a further £1 million over the weekend.

“I don’t know if we would be prepared to match [Chelsea’s] offer to be honest with you, I doubt it very much,”

“Our chairman made an offer to take him but Chelsea have come in with £3 million and, if Everton are prepared to sell him, they would probably get him.”

No stranger to doling out the odd ‘palm-greaser’ hither and thither himself, Old ‘Arry also admitted that he was a little bemused about Chelsea’s nefarious tactics in the run up to the lodging of their bid:

“It’s all very strange to me how they have suddenly offered £3 million for him.

“The manager of Chelsea (Carlo Ancelotti), he’s a lovely guy and honest as the day is long, comes on television and denies they made an offer for Pienaar. I don’t know who has made the offer.

“I’ve got my own ideas about the whole situation but I couldn’t say. I think I do know what’s happening but, if I said, I would be in big trouble.”