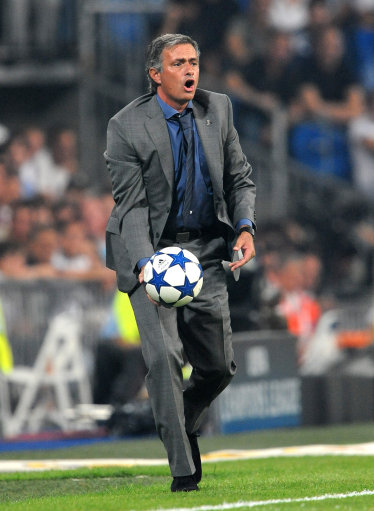 According to the Daily Mirror‘s ‘see what sticks’ football section, coach Jose Mourinho is fully ‘prepared to quit’ Real Madrid at the end of the season, after reaching the end of his luxuriantly-groomed tether with the club’s sporting director Jorge Valdano –who has yet again failed to impress our Portuguese protagonist, this time with his feeble efforts to sign a replacement for Real’s recently waylaid striker, Gonzalo Higuain.

Stuck without a replacement for Higuain, Mourinho apparently handed his immediate superior (in job title only, no-one is superior to Jose) a lengthy list of targets several weeks ago, though none have materialised – with poor old stricken Mou having to make do with just €35million’s worth of Karim Benzema to tide him over.

The long and short of it seems to be that, Mourinho wanted Fernando Llorente, Valdano wouldn’t pay €1bajillion for the pleasure, Mourinho had a little cry.

Any road up, Mourinho is clearly gettin’ too old for this sh*t:

“I am not the one to talk to about the strikers. I did all that in pre-season, when I said we needed more than two, and in November, when we all knew [Valdano] needed to give Higuain time to recover.

“So I am not saying anything. You can speak to the people who send out the messages. I’ve got to where I am because I think for myself. I’m too old for them to send me messages in newspapers.

“I’m a dinosaur and don’t go for that. I make my choices and if I have questions, I ask for advice from my staff.”

Rather inevitably, the Mirror also speculate that should the ‘Special One’ vacate his post at the Bernabeu, he may be set for a return to the Premier League in order to finally fulfil his destiny at Manchester United or replace Roberto Mancini once again, this time at Manchester City – to which I say both ‘pah!’ and, indeed, ‘pah!’.