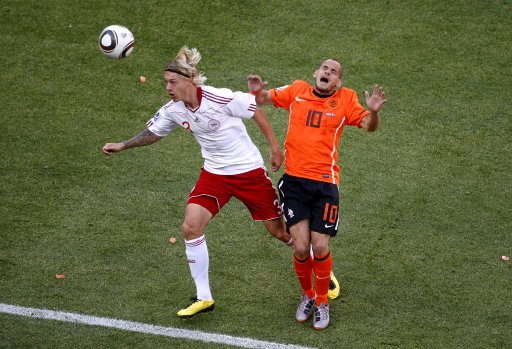 Several reports emanating from Germany (via the Daily Mail) this morning are suggesting that Danish centre-half Simon Kjaer, who only joined Bundesliga outfit Wolfsburg a couple of months ago, is set for a shock £12.5 million move to Chelsea and may complete the whirlwind switch before the weekend is out.

The Mail reckon that Chelsea only enquired about Kjaer’s availability on the off-chance, after finally ‘seeing the Luiz’ and realising that Benfica’s £26 million valuation of long-term target David Luiz was a little on the stupidly, prohibitively rich side – only to be told that the 21-year-old Dane was indeed keen on a move to Stamford Bridge.

Now, obviously this call all be horse-cock and poppy-feathers, but wouldn’t it be bloody lovely if it were true?