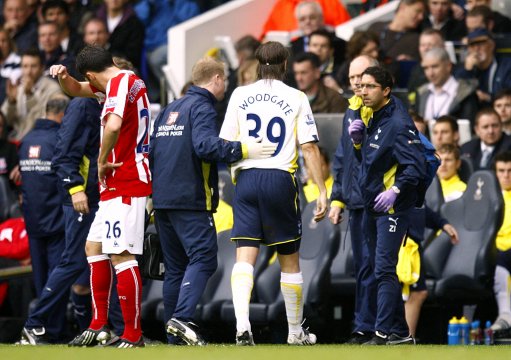 Tottenham manager Harry Redknapp has been quick to put the kibosh on rumours that surfaced over the weekend linking recently un-crocked centre-back Jonathan Woodgate with a shock loan move to bitter rivals Arsenal.

When asked whether a deal was in the offing with Arsenal, Redknapp replied:

“No, not a chance. We wouldn’t let him go there, we want to keep him.”

The Spurs boss also confirmed that the club are willing to offer Woodgate a new contract in the summer, but only if the defender can prove that his elastic groins, plasticine ligaments and warm chocolate tendons are up to task:

“He’s out of contract in the summer so if we let him out on loan, then we’re not giving him away unless he signs a new deal before he goes and you couldn’t do that right now in case he breaks down.

“He needs to stay here and see how it goes and if he’s okay, we can sit down at the end of the season and give him a deal for next year – but it would have to be heavily loaded as a pay-as-you-play deal.

“I love Jonathan but you can’t keep paying wages to a boy who doesn’t play all year.”

Woodgate came through the first-half of a reserve game unscathed last week, though ‘Arry was far from impressed with the standard of the opposition:

“Jonathan’s been out of the team for two years, but played 45 minutes against a QPR team Neil Warnock sent. Although I think they were just waiters from the Shepherd’s Bush area.

“It wasn’t a great test but Jonathan’s doing well. He’s coming back and when he’s fit, he’s a (wait for it…) top, top centre-half.”