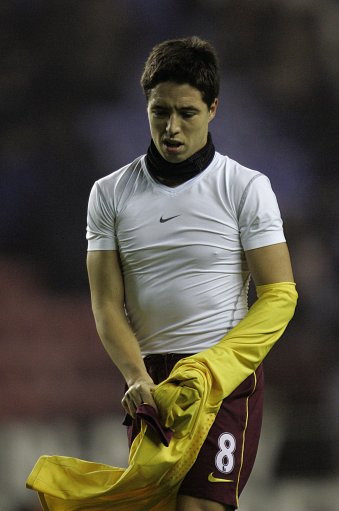 “You can leave your snood on!”

It would appear that Samir Nasri is on the verge of signing a new five-year contract extension at Arsenal, with the Sun adding that the deal is almost certain to land the lesbi-esque French tyro with a guaranteed weekly wage of £75,000.

Nasri’s agent, Jean-Pierre Bernes, is quoted in a couple of this morning’s tabloids as saying:

“Samir is happy at the club, the coach believes in him, the directors believe in him as well.

“He said to me, ‘You won’t believe the great atmosphere in the changing room, I’ve rarely experienced anything like this’.

“Samir has done his three seasons with Arsenal and the wise thing to do is to stay with this club.”

Nasri has blossomed from a ‘scintilla player’ (a phrase I’m desperately trying to legitimately coin) into a genuine, and fairly reliable match-winner for Arsenal this season.