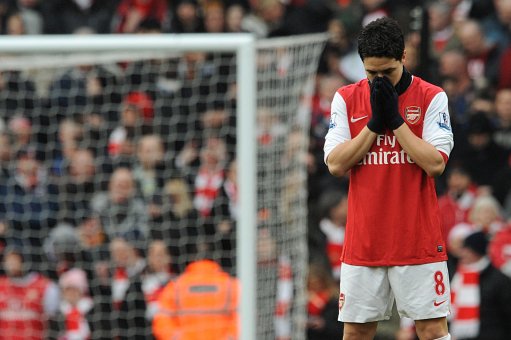 The Daily Mirror are going big today with news that Samir Nasri has ‘hinted’ that he may quit Arsenal for Barcelona in the summer if the Gunners successfully pip Manchester United to the Premier League title – a claim they are backing with quotes taken from an interview that Nasri gave to a free, weekly sports magazine entitled Sports Magazine.

When questioned about his decision to delay any contract re-negotiations until the end of the season, Nasri replied:

“I’m always flattered when my name is mentioned in connection with any big club, but I also know how things work.

“As things are right now, I am happy here and I have ­confidence from the manager, but things can change quickly in football, and then we may have a new situation.

“We promised each other to speak about this subject after the season ends. One of the reasons I came to Arsenal was to win titles, and I’m not expecting to leave without one.”

Fairly standard, non-commital replies in my book, though the Mirror care to differ – going on to state that Nasri is indeed on Barcelona’s ‘most-wanted list’ despite him making no actual references to the Catalan giants whatsoever.

Indeed, there’s also a little intro to Sport’s article which the Mirror duly decided to omit, which sees the interviewer begin by asking Nasri if he’s ever considered leaving Arsenal, to which the Frenchman replies: “No, I honestly haven’t thought about it.”

This comes on the very same day that The Sun too set about stirring the scheisse with an EXCLUSIVE report on Arsenal’s raid for Barca’s prodigious 16-year-old midfielder John Miquel Toral – which they first knicked off the Young Guns blog then duly illustrated with a picture of Toral’s former fellow Barca sapling, Sergi Samper.

All in all, it’s been a grand day for the tabloids.

Oh, and apologies for the slightly tongue-on-cheek headline, I hope we can still be friends.