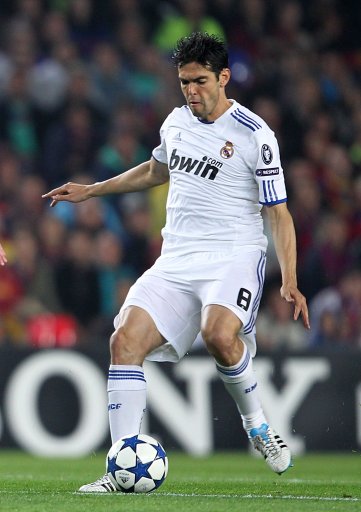 Kaka’s dear old mama, Simone Leite, has sent the gossip hounds of the world into a frothy tizz by claiming that her brood are moving to London in August, which can only mean one thing – young Ricardo is almost definitely going to rejoin Carlo Ancelotti at Chelsea.

”We are going to be in London next season where we will be preaching the word of God. We will be there from August – I can tell you.”

Sounds like either Kaka is indeed set to try his luck at Stamford Bridge next season or the Leites are planning to bring their roving ‘I Belong To Jesus’ Bible camp to these fair shores.

With Real Madrid signing Borussia Dortmund midfielder Nuri Sahin a few days ago, it looks like Kaka’s days in the Spanish capital are numbered after failing to launch since leaving Milan.

It’s also fair to suggest that Chelsea are the only London-based side that could realistically hope to match the £140,000-a-week that Kaka is currently on at the Bernabeu – though the Daily Mirror are also throwing Manchester City’s name into the mix as they are known to have flirted heavily with the Brazilian before, back in January 2009.

Bearing in mind that he certainly wouldn’t come cheap, do you reckon that Chelsea (or anyone else for that matter) would be wise to take the gamble or is Kaka a busted flush?