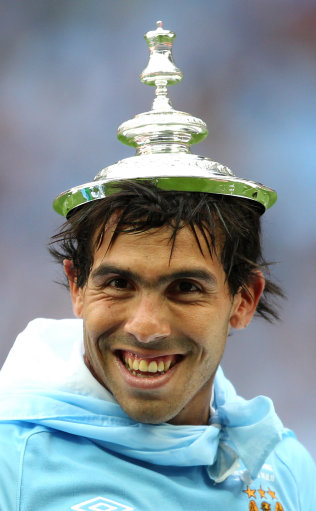 With his young family growing up without him in Buenos Aires and a multi-million pound contract keeping him anchored in Blighty, Carlos Tevez is a man stuck between a rock and a obscenely lucrative place – a position he makes no bones about milking on a fairly regular basis.

The latest spin on the ‘will he/won’t he just jack it all in’ saga sees Tevez hinting that he may now be willing to lavish City with another season of his precious time so that, together, he and the club can hunt down the Premier League title.

Tevez is quoted in The Sun as saying:

“Winning the title is a great motivation for me to stay, it would make me so happy. It is what we all want and need – although now it’s time to celebrate winning the Cup.

“Here we are trying to build a team to win trophies including the Premier League and we are focusing on that, but we remember very well that flag at Old Trafford which taunts City.

“Now it makes me very happy that they will have to take it down.”

However, such quotes aren’t enough to sway the Express or the Telegraph, both of whom are certain that Roberto Mancini has handed Tevez a two-week deadline to decide on his future in order to give the club enough time to bring in a direct replacement for the Argentinian striker – with Didier Drogba and Zlatan Ibrahimovic both mentioned by name.

C’mon City, have a heart. Zlatan in the Premier League MUST happen. Pies would probably melt by October.