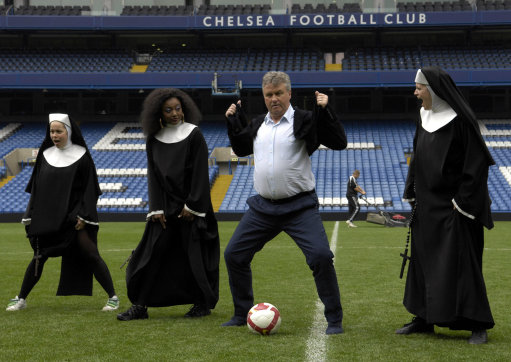 It’s a fairly widely known secret that Chelsea are desperate to install Guus Hiddink as their new/old manager, and it looks like they’ve been taking the ‘Abramovich Expressway’ in order to do so – i.e, just ignore all the rules and protocol until you get caught with your hand in the cookie jar, then throw money at it until it goes away.

If what we are led to believe is true, then Hiddink is on the verge of leaving his post as manager of the Turkish national side in order to replace Carlo Ancelotti at Stamford Bridge, despite giving several assurances that he would stay put until after Turkey’s Euro 2012 campaign – which, it’s fair to say, hasn’t best pleased the president of the TFF (Turkish Football Federation), Mahmut Özgener.

Özgener is quoted in Turkish paper Hurriyet as saying:

“Chelsea has a past record for signing players who are under contract, if the same thing happens, we will make a file of the payments we made to Hiddink and we will go to Fifa.

“After the Belgium game, I went to the dressing room and asked Hiddink what he will do.

“He replied, ‘I will go to Turkey’s B team match and then go to South Korea for a charity match.’ But after that I learnt he said different things to the players. He should have told me what he told the players.”

“You cannot come to Turkey and then just leave when you want.”

Özgener would have his work cut out trying to sound any more sinister than he did with that last sentence. Perhaps if he continued “…or you will end up in a bin bag at the bottom of the Bosphorus with your feet no longer attached to your legs”, maybe?

Any road up, it looks like Guus better stay put for the time being.