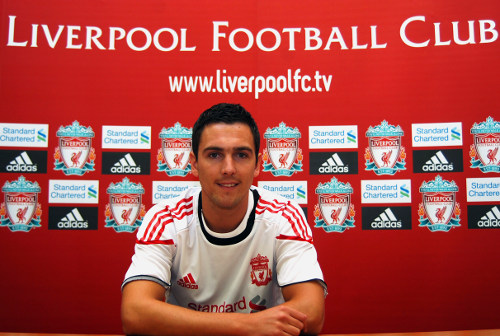 After a couple of weeks of dilly-dallying, Liverpool agreed a fee and completed the signing of Stewart Downing from Aston Villa all in the space of 24 hours yesterday – with the winger passing a medical and agreeing a ‘long term’ contract at Melwood, before officially sealing a deal believed to be worth somewhere just shy of the £20-million mark.

“It’s a great feeling and I’m very happy to be here. It’s been a long time coming and I’ve had to wait a few weeks, but I’m really pleased to be here.

“With the tradition, the manager and the players they have here, there was a big temptation to come and once I knew of their interest, there was only one place I wanted to go.”

By way of a replacement, Villa are apparently close to snagging Charles N’Zogbia from Wigan for around half of the Downing windfall, £10 million, which, if you ask us, seems like a bit of pretty shrewd business.

In further Liverpool news, Brazilian ‘keeper Doni also signed on the dotted line at Melwood last night, though the Reds have decided to be Secret Peters and not disclose any financial details of the deal or the length of the 31-year old’s contract.