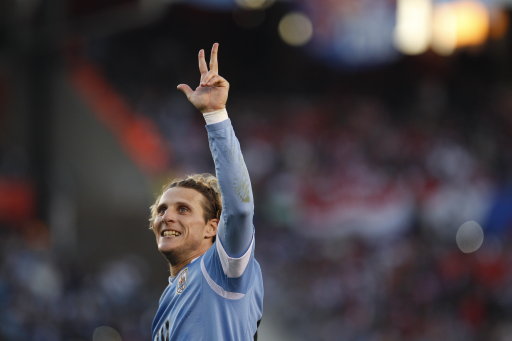 Make of this what you will but Diego Forlan has told a Turkish newspaper that he is in talks over a move to Inter Milan after refuting talk of him joining Galatasaray while on holiday in Miami:

“Yes it’s true. I’ve received an offer from Inter and to play in Milan is my dream.”

‘Turkish newpaper’ sounds disconcertingly vague to us but, never-the-less, the quotes have since been picked up by the Italian media, who reckon it’s now a two-horse race between 32-year old Forlan and Man City wastrel Carlos Tevez as to who Inter will bring in to replace Samuel Eto’o – who joined Russian side Anzhi on a colossal petro-contract last week – at the Guiseppe Meazza.

Any thoughts Pies fans? Personally, we’d have loved to see him take another crack at the Premier League, if only to banish the ‘inept’ caricature of him that still persists in England to this day thanks to his patchy time at Manchester United all those years ago.