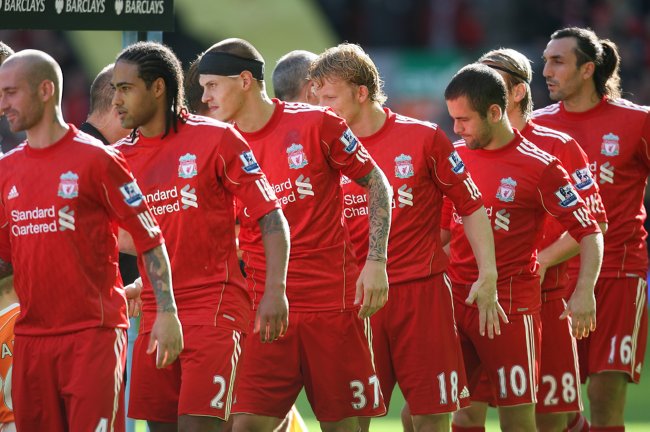 After bringing in a bevvy of new faces over the summer, it seems that Kenny Dalglish is keen to move on a few of his fringe players/dead wood before September rolls around, with five players being mooted for export this morning.

We’ll start with the most unlikely to go through, with the whisperings that Inter Milan are sniffing around Dirk Kuyt again, though it’s thought that Dutchman and his glorious mane of wet spaghetti hair will snub any offer from Italy as he’d much prefer to stay at Anfield until they chuck him out – a wise choice.

Secondly, word is that AC Milan are all set to tie up a deal for Alberto Aquilani by the end of the week, before switching their sights and pursuing Peter Crouch of Spurs fame – yep, that Peter Crouch.

Elsewhere, overly hirsute centre-back Sotoris Kyrgiakos has officially left Liverpool and signed for Wolfsburg on a two-year deal as of this morning, with Joe Cole the subject of a loan approach from QPR and David N’Gog teetering on the brink of joining Bolton for somewhere around £3.5-4 million.

On the acquisitions side, Mick McCarthy has apparently told Liverpool where to stick their interest in hard-working striker Kevin Doyle, but several papers seem to agree that an £8 million deal for Birmingham defender Scott Dann is being explored.

Phew, what do you make of all that malarkey then ‘Pool fans? Surely it’d be a bit of a wrench watching Joe Cole leave after so many months of dedicated service?