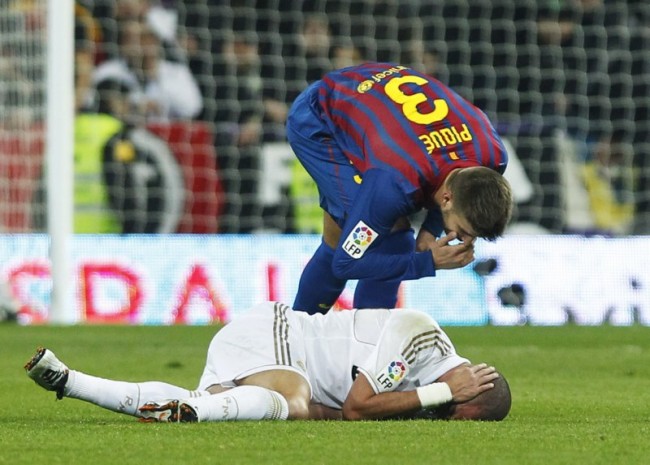 “I fart in your general direction!”

Eric Abidal’s second goal in over five seasons at the club saw Barcelona come from behind to snatch the victory in last night’s Copa del Rey quarter-final first-leg El Clasico in the Bernabeu.

Cristiano Ronaldo put Real Madrid one-up after ten minutes when he went off yomping down the left wing and lashed a low shot through Pinto’s legs at the near post.

Barcelona had to wait until five minutes after the interval for their equaliser, Carles Puyol thundering Xavi’s corner home with a charging diving header (shades of his goal for Spain against Germany in the World Cup semi-final last year) before, with ten or so minutes left to play, Abidal collected Lionel Messi’s rinky-dinky throughball and poked a finish past Casillas for the winner.

Bit of related trivia for you: Carles Puyol hasn’t lost in 51-straight games for Barcelona including last night’s outing. That’s 21 months without tasting defeat for the skipper. Not bad.

Oh, and in case you missed it, Pepe did this.