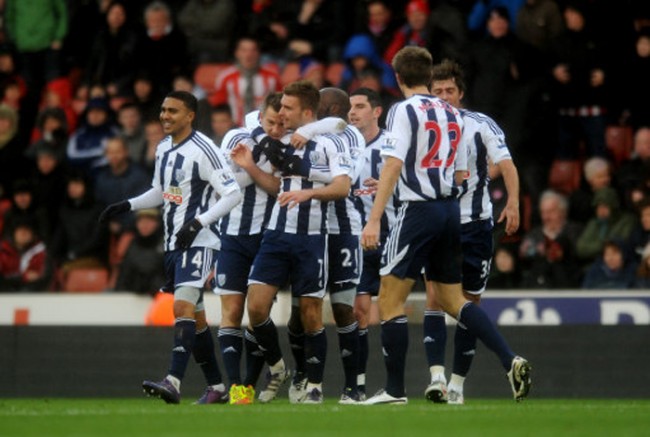 West Brom secured a vital three points away at a blustery Britannia against a Stoke side who never really got into their stride.

James Morrison put the Baggies ahead on 35 minutes, after his swerving free-kick deceived Thomas Sorensen in the Potters’ goal.  The visitors were on the attack again after the break, with Morrison again troubling the Stoke ‘keeper, only to see his drive come back off the woodwork.

The home side had a great chance to get themselves back into the game, when Gareth McAuley was rather harshly adjudged to have fouled Jonathan Walters in the West Brom box. However, Ben Foster saved Walters’ spot-kick to keep the visitors ahead.

The equaliser did eventually come, however, courtesy of sub Cameron Jerome, who scored from a Jermaine Pennant free-kick on 86 minutes.  That goal looked to have settled the game until Scottish international Graham Dorrans’ last-minute free-kick somehow found its way into the back of the Stoke net.

Roy Hodgon’s secured their first win of new year, while Tony Pulis and co. were left pointless after a below-par display.