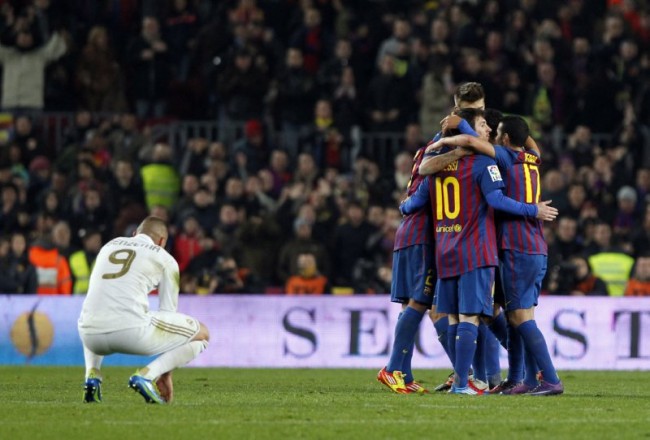 Despite leading 2-1 from the first-leg and going a further two goals ahead by half-time in the second through Pedro and Dani Alves, Barcelona still found themselves fretting at the Camp Nou as Real Madrid staged a late-ish comeback attempt that saw Cristiano Ronaldo and Karim Benzema draw Los Merengues level on the night – though it was to be in vain, as Barca eventually held out for the aggregate win that sealed them a berth in the Copa del Rey semi-finals.

Sergio Ramos had a goal struck off, Mesut Ozil sent a clanger against the bar from 30-yards, etc, etc, but Jose Mourinho still ended the night with his nine-match winless streak at the Camp Nou pristine and intact – telling reporters after the game that it was ‘impossible’ for his side to win after watching them accrue eight bookings (including two for Ramos, his 13th dismissal for the club) on Barca’s patch.

He’s such a victim, is our Jose:

“I heard my players say it was impossible to win here. I made no mistakes, we played a good game. We knew we were behind, we were motivated. We came here looking to win, but no.

“I have played [at the Camp Nou] with Chelsea, Inter and Madrid various times and this is nothing new.

“I will congratulate Barcelona for what they did at the Bernabeu last week but not for the qualification.”

Such a good sport too.