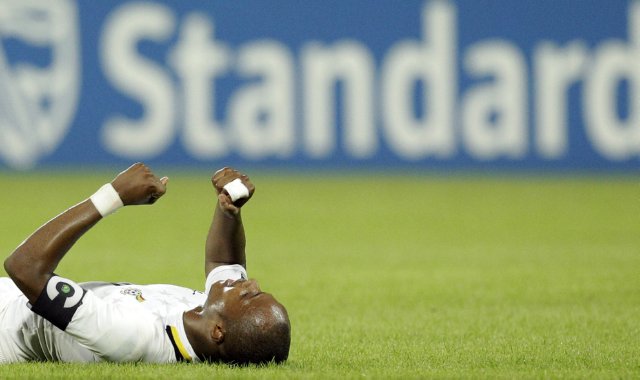 Ayew do you do guvnor?

After the entertaining, exciting, exuberant and down-right enthralling set of matches that the 2012 Africa Cup of Nations laid on for us in the group stages, surely it could only get better for the last 8?

The quarters threw up some potentially great matches, with established African giants taking on ballsy underdogs and vice-versa. Star names like Drogba, Toure, Gyan and Keita were in the hat and purring along as expected, but newer emerging talent; names like Pierre Aubameyang, Christopher Katongo and Rainford Kalaba, had all shone in the previous rounds (and wreaked havoc with spell check). The promise of the new blood mixing it with the old guard was an enticing one.

It stood to reason that, with the deadwood flushed from the competition, the knockout stages should have been chock-full of all-guns-blazing, high octane football. How verily wrong we were.

Sudan’s unlikely success came to an end on Saturday night at the hands of the ever-impressive Zambia. The Sudanese were completely torn apart by the Zambian front three of Kabala, Katongo and Mayuka.

Following Stophira Sunzu’s 15th minute opener, the score stood at 1-0 to Zambia for what seemed like an age. For roughly an hour or so, Sudan competed fairly well, moving the ball around comfortably and creating a number of chances – yet, on the 66th-minute mark, it all fell apart on 66 when Ali Saif Eldin brought down Kalaba in the area and was duly given his marching orders.

Katongo missed the penalty but knocked in the rebound to put the Chipolopolos two up, with the Desert Hawks completely collapsing thereafter -substitute James Chamanga rounding off Sudan’s miserable evening, slotting away a lovely third goal to flesh out the victory.

Once again, Ivory Coast cruised to another victory, winning 3-0 against co-hosts Equatorial Guinea – a side who had won the hearts of a fair few neutrals thanks to some gutsy displays during the group stages. However, this game was proved to be the dreaded ‘game too far’.

A determined Didier Drogba ran riot, scoring a brace -indeed, the Ivorian goal machine had earlier missed a penalty, which probably spurred him onto to make amends. The Nzalang Nacional had tried fought hard but the Elephants were just too strong, skillful and damned elephantish. Yaya Toure’s emphatic 30-yard free-kick rounded up proceedings nicely and sent the men from the Equator packing.

However, they can certainly hold their heads high as, when you factor in that they were the lowest ranked team in the tournament (151st) – to have made it to the knockout phase was in and of itself an undertaking of near-Herculean magnitude.

Gabon; co-hosts and my personal team of the tournament, have crashed out of the 2012 Africa Cup of Nations. They finally succumbed to a resolute (and fairly boring) Mali team, who defended well but probably didn’t deserve to go through in the grand scheme of things on account of being – as I alluded to earlier – fairly boring.

Gabon’s Eric Mouloungui scored the opening goal early in the second half but the Panthers failed to capitalise on their advantage. Instead, Mali bideded their time until sub Cheick Diabate scrambled the ball across the line in the 84th minute to break Gabonese hearts.

As extra-time rumbled on, both sides looked fairly content to wear down the clock and settle things over penalties…and that’s exactly what happened.

It was then left to Mali’s Mr Dependable, Barcelona midfielder Seydou Keita, to seal the victory from 12 yards, which he duly did do – very dependably.

You have to feel for Aubameyang, who had been a real shining light in the competition up until that point. For his failed spot-kick to be the one to knock his country out of the Africa Cup of Nations was a really cruel twist of the knife.

Quite how Ghana have managed to stumble their way through to this point in the tournament is staggering. Once again, they somehow engineered themselves a win out of absolutely nothing after coming up trumps against the Tunisians.

In fairness, the Black Stars got off to a flyer when John Mensah nodded home after ten minutes, yet they were pegged back before half time when influential Tunisian striker Sabeur Khalifa scored from close range.

The second half saw an end-to-end game with both Emmanuel Badu and Youssef Msakni coming close for their respective teams. Extra-time was soon upon us and just when it looked penalties would be ushered in to determine things, the Tunisian goalkeeper dropped an absolute clanger to gift Ghana a late, late win.

A fairly innocuous cross was floated into the box, a cross that should have been an easy routine take for the hapless Aymen Mathlouthi. Unfortunately for him,common sense abandoned him in this trying hour and the ball simply squibbled free of his grasp for Marseille winger Andre ‘Dede’ Ayew to poke into the vacant net and thus secure Ghana’s passage to the semi-finals.

Aymen Abdennour didn’t help his fellow Tunisian compatriots by getting needlessly sent-off as the game descended into something of a farce in the closing minutes. Oh silly Abdennour, will you ever learn?

So, within the matter of 48 hours, both co-host nations have been knocked out and the stronger, more experienced nations have restored some sort of footballing order. As such, the semi-finals look a bit like this…

I’m not one to make predictions, but with Ghana being rather uninspiring so far and having to face the electric Zambians, I fancy we may have a real upset on the cards.

A Ghana-Ivory Coast final it is then.

In a ‘suggested further reading’-type thing, you can read Greg’s all-encompassing retrospective of the ACoN’s group stages here.