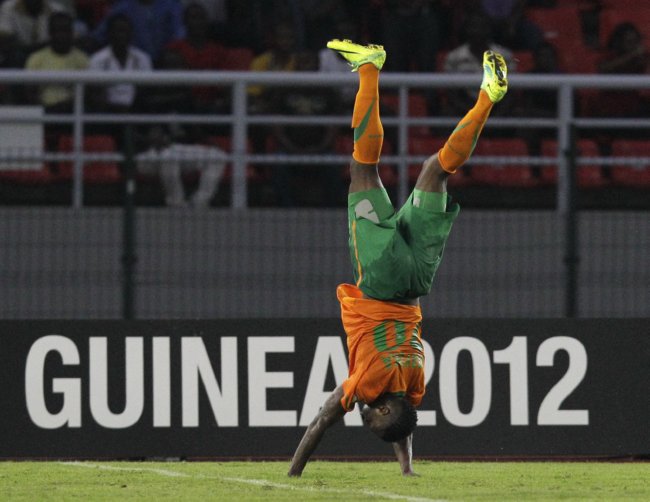 So, here we stand. Just one game away from finding out who will win the 2012 Africa Cup of Nations – a tournament which stampeded out of the blocks with a thrilling start, but has since turned into something of a pale imitation of itself with a few drab games starting to crop up as the stakes get higher.

By way of a quick recap, after a roller-coaster group phase, the quarter-finals plodded along with a couple of noteworthy upsets but nothing overly outrageous to dwell upon. Anyway, before we begin looking forward to Sunday’s thoroughly unexpected final match-up in Libreville, let’s have a little look at what cracked off in yesterday’s semi-final encounters to produce it.

On paper, and to those otherwise unaware of Ghana’s off-colour showing this year, this game looked like a gimme for the Black Stars, but Zambia managed to dispatch their staggeringly poor opposition without too much fuss.

Uncharacteristically, the Zambian team were quite happy to sit back and absorb pressure, hitting Ghana on the counter-attack as and when. The ‘long haul’ tactic eventually paid off – but it could have easily backfired when Ghana were awarded a penalty in the first half.

UAE-based money grabber Asamoah Gyan stepped up with the intentions of breezing Ghana into a cocksure lead, though his wan effort was repelled thanks to a fine save from Zambian keeper Kennedy Mweene.

In all fairness, a fluffed penalty was about the only thing Gyan contributed to the game, and his lacklustre approach saw him subbed on the 74-minute mark. He’s since become a national scapegoat rather unfairly though, given his blunt African Nations campaign, I doubt Martin O’Neill will be recalling him into a rejuvenated Sunderland set-up once the striker’s Arabian vacation comes to an end in July.

Anyway, shortly after Gyan’s departure Zambia found the back of the net. Second-half substitute Emmanuel Mayuka, held the ball up on the edge of the area, fooled the defender with an exquisite feinted backheel and curled the ball low into the far bottom corner, well beyond the reach of Adam Kwarasey.

That wasn’t the end of things though. Ghana pressed the Chipolopolos for a late equaliser and came close on several occasions, no thanks to some shocking defending from Zambia. Unfortunately, it all fell apart on 83 minutes when Derek Boateng, who had otherwise been fantastic, was shown a harsh red card for a second bookable offence (both offences added together barely warranted a yellow).

Great scenes followed the final whistle, as the Zambia team, who have been through the mangle and suffered some true tragedies in their recent history, celebrated reaching their first ACoN final since 1994.

A lot of questions will be asked in the Ghanaian camp though, especially after so many of their big stars underperformed so very badly.

As they have done all tournament, Ivory Coast stormed to yet another easy victory as their collective charge towards the Liberville final continued in the last 4 – this time at the expense of Mali.

A uninspiring game was settled by just one goal, but a special goal nonetheless. Gervinho picked the ball just inside his own half and, after a quick nutmeg through Ousmane Berthe’s pins, he was away – bursting down the left hand flank, unopposed by any oncoming defenders, the spindly Arsenal forward slotted the ball into the opposite corner and ran off to celebrate.

Impressive as it was, the Ivory Coast’s goal was conceded far too softly. Indeed, there is an argument that it could have been prevented if the Malian captain, Cedric Kante, had actually decided to close down Gervinho rather than watching what Yaya Toure was doing elsewhere. Guess we’ll never know now.

That’s not to take anything away from Gervinho himself, who galloped a vast distance before retaining a cool head (his forehead probably regulates cranium temperature far more efficiently than your average human being) to roll an angled finish in from a tight-ish angle. Gunners fans will be hoping to see a lot more of that when he returns to these shores.

The second half was a scrappy affair as both teams pressed but neither side managed to score again. Ivory Coast were denied by some timely saves from Soumbeila Diakite, whilst Mali simply couldn’t get past the colossal duo of Kolo Toure and Leicester’s Sol Bamba. Toure was a real rock in the heart of the defence. Any Manchester City fans who have been watching will be eager to see him return to their starting line up if this form continues. Let’s just say “he’s considerably better than Stefan Savic” and leave it at that.

For Mali, it was an impressive effort to get this far, considering they have relied heavily on Seydou Keita throughout most of the tournament. As talented as the Barcelona midfielder clearly is, he’s not the kind of player that can carry a side to tournament glory.

As for the Elephants, they’re now just one game away from getting their hands back on Africa’s most prestigious trophy. Incidentally, they’ve not conceded a single goal throughout the entire tournament so far – which is just about as ominous as stats come from an opponent’s perspective.

Sunday’s final, on paper at least, should be a classic. The fast-paced passing and shoot-on-sight mentality of Zambia playing off against the strong and direct football of Ivory Coast.

It will undoubtedly be an emotional occasion as Zambia look to exorcise the demons of their fallen comrades in 1993, whilst this golden generation of Ivory Coast players are looking to win their first major tournament together.

For Mali and Ghana, an unwanted third-place play-off remains for them to contest. There’s a good chance that the lure of the wooden spoon game will be ‘niche’ at best, however Sunday’s final looks like a special event – celebrating all that is great about African football.

More from Greg ‘One Eye on Africa’ Evans on Pies…