While making their way home from an away match against Kardemir Karabükspor a couple of nights ago, Turkish top flight side Samsunspor flirted with disaster when their team coach was side-swiped by a train on a level crossing.

The incident was captured on CCTV… 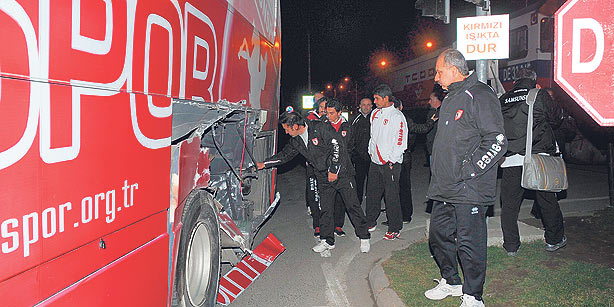 No-one was killed or maimed as, thankfully, the train appeared to be slowing – though the two players who were sitting directly above the left-rear wheel arch of the bus (defender Hakan Arslan and midfielder Serdar Özkan) suffered significant but not life-threatening injuries.

“It was midnight. The ramps were up when I was about to cross. While slowly crossing, I realized a train was approaching and had its lights off. I immediately accelerated.

“After I stepped on the gas, the train hit the left back wheel of the bus and pushed us aside. If I had not seen the train at the last second, it would have hit the middle of the bus and that would have led to great damage and could have even cost many lives. The players awoke in panic; many later said they were lucky to have survived.”

Looks like the lights were on to me Recep. Just saying.