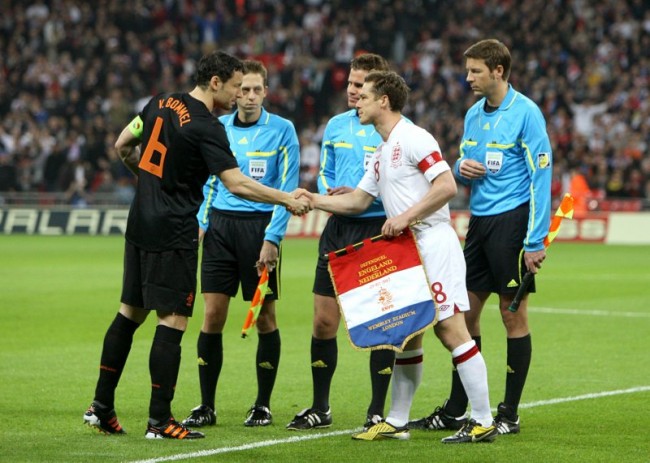 England welcomed Holland back to Wembley for the first time since Euro ’96 last night and were ultimately undone in injury-time by Arjen Robben’s deflected winner.

After a fairly flat first half, Robben opened the scoring on the hour – flitting through the England midfield before pinging a low shot through Gary Cahill’s legs and past Joe Hart from the edge of the area. Klaas-Jan Huntelaar then doubled the lead two minutes later, rising to meet Dirk Kuyt’s peachy cross with a thumping header – knocking heads with Chris Smalling in the process, leaving both players wappy on the turf and requiring medical attention.

Indeed, Huntelaar was helped off the field with blood streaming from his nose, while Smalling was rushed straight to hospital on a stretcher with a deep laceration in his forehead.

As Holland eased off again, England pulled themselves level through first Cahill then Ashley Young in the 90th minute, but Robben ensured the better side emerged victorious when his cute curling effort clipped that man Cahill’s shoulder and diverted past the helpless Hart in the dying seconds.

(Pies’ XI conclusions from the game can be found here)