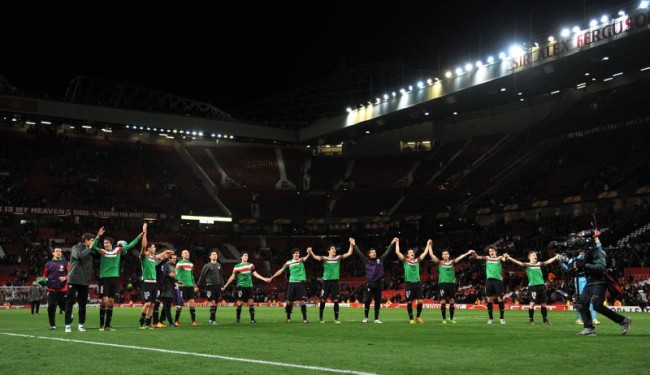 Manchester United suffered yet another home European defeat, finding themselves thoroughly out-ran and out-played by Athletic Bilbao at Old Trafford, who were everything you’d expect a Marcelo Bielsa side to be; effervescent, energetic, skillful, direct and perfectly willing to charge around at full-tilt from whistle to whistle.

Despite not putting a foot right up until that point, Wayne Rooney swept United in front on 22 minutes, prodding home the rebound after Javier Hernandez’s shot was parried conveniently into his path by Bilbao ‘keeper Gorka Iraizoz, before the barnstorming Fernando Llorente headed home to level the score a minute or two before the break.

David De Gea and his mighty chinstrap were in inspired form throughout, thwarting Bilbao with a series of full-stretch saves, unfurling himself like a big yellow sleeping bag to swat away shot after shot right up until Oscar de Marcos put the visitors ahead with 20 minutes left – delightfully volleying Ander Herrera’s scooped throughball back across himself and in at the far post (from a marginally offside position) to set the stage for a bewildering, frenetic finale.

With the clock ticking past the 90-minute mark, Bilbao struck again in a haze of ineptitude – referee Meyer stopping play when Patrice Evra’s boot came off, only for the Basques to lump it down the line from the restart, with De Gea initially saving well from De Marcos while hideously exposed – though Iker Muniain comfortably beat the dawdling Rafael to the rebound and steered past the sprawling De Gea from close-range to put his side 3-1 up on the night.

United were then awarded a slightly daft penalty for handball a minute later (rightly or wrongly, it would’ve been a free-kick on the edge of the box all day long if the referee wasn’t feeling so sheepish about his earlier error) which Rooney consummately dispatched into the bottom corner to eventually land United with a 2-3 first-leg scoreline that they, in all honesty, barely deserved.