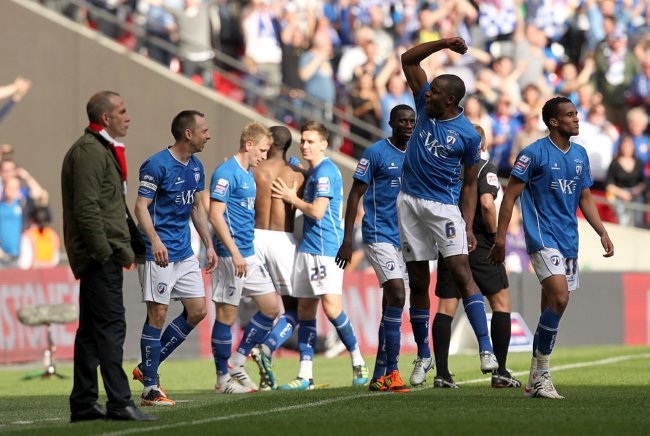 ‘Twas the Johnstone’s Paint Trophy Final at Wembley yesterday, which saw Chesterfield emerge victorious over Paolo Di Canio’s  Swindon Town thanks to an own-goal from Oliver Risser and a 94th-minute second from Craig Westcarr – who, by rights, shouldn’t have been on the pitch given that he had clouted his fist across Joe Devara’s face earlier in the game, bloodying the Swindon defender’s nose and inexplicably escaping punishment; a clear punch Westcarr later described as ’50/50 shirt pulling’ with a entirely straight face.

Di Canio insisted on wearing his lucky coat and scarf throughout the game, despite Wembley being bathed in a halo of cloying afternoon sunshine. Indeed, it was a pleasure watching him squirm while doing his utmost not to appear the slightest bit uncomfortable on the sidelines.

It proved a bittersweet day out for one of my undisputed favourite players, Jack Lester (yes, really), who – having scored the late winner against Oldham at Boundary Park to get Chesterfield to the final – firstly had an opening goal wrongly disallowed for offside before being forced to limp off with a groin twang after 37 minutes. The sorrow was palpable as a 36-year old pro realised what was, in all honesty, likely to be his last chance to play at Wembley was to come to a cruel, premature conclusion. His face in the stands was a picture of pure, unrefined sadness. At the very least, all looked well again when he was allowed to lift the trophy.

So, with the JPT snared, Chesterfield’s collective thoughts will now turn back to the entirely more pressing matter of their League One survival struggle, with the Spireites currently stranded at the bottom of the pile, seven points from the dotted line.

Speaking after the final, boss John Sheridan – without wanting to take the *ahem* gloss *ahem* off their Johnstone’s Paint victory, said he’d willingly sacrifice the trophy to secure their League One status.