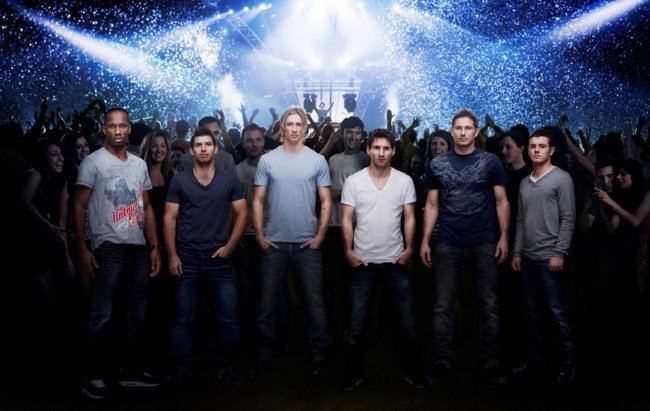 Remember that really crap-looking boy band that Pepsi have thrown together which we told you about a while back? No? Of course, why would you?

Well, Didier Drogba, Frank Lampard, Lionel Messi, Sergio Aguero, Jack Wilshere and Fernando Torres have all got on board with the fizzy pop merchants and gangly Scottish DJ Calvin Harris to produce a series of ‘Kick in the Mix’ football/music snippets – the first of which being the following TV advert, which sees the aforementioned sextet trampling on various plebs in a club before Lionel Messi makes off with a vending machine.

Is it just me, or are football ads getting weaker and weaker? There’s too much glitz and not nearly enough ‘topless John Barnes’ these days.

Don’t get me wrong, L’il Leo’s ‘I stole your Pepsi #lolzilla’ face is textbook, but other than that there’s not an awful lot to savour. No cage, no eviscerated devil, no topless John Barnes, no nothing.

Feel free to venture this way for 12 fine examples of proper football-related commercial gubbins, which may or may not feature prolonged periods of topless John Barnes.