Roughly a month since Sulley Muntari failed to register with a header that breached the goal-line by a clear yard against Juventus, AC Milan found themselves on the stinky end of another ‘ghost goal’ at the weekend – though it must be said that Robinho’s goal-bound trundler during the Rossoneri’s 1-1 draw with Catania on Sunday was altogether less clear cut…

We’re not so sure and, given that we’ve had the liberty of watching a raft of slow-motion replays several times and still can’t quite decide which side of the fence to come down on, you can certainly empathise with the officials here. It’s a toughy.

Not that Milan themselves were quite so impartial, issuing a pissy one-word statement via their official website along with the following, heavily-pixelated lo-res (and possibly doctored for all we know) image…. 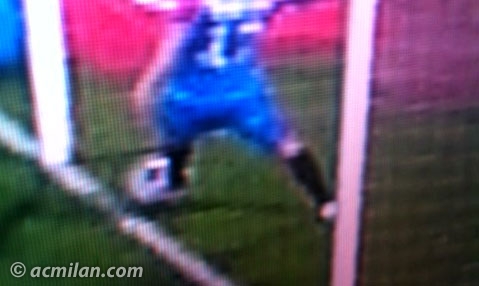 The one word? ‘UNACCEPTABLE!’

What do you reckon folks? Did it or didn’t it?

This way for more ‘Ghost Goals’ on Pies.