After going 1-0 down after half-an-hour, Barcelona came back to stick four past Real Zaragoza on Saturday with Carles Puyol getting the ball rolling with the equaliser, Messi making it 60 goals for the season with a brace (becoming the first man since Gerd Müller in 1972/’73 to pass the 60-goal barrier) and Pedro adding the icing with a fourth in the 92nd minute.

Bedraggled Barca captain Puyol also suffered a cut above his eye during the first half and, being the well and truly hard mutha that he is, had the wound stapled shut on the touchline.

Indeed, he was so eager to get back out into the fray that he tried to grab the staple gun from the dawdling medic and stitch his own face up at one point!

Puyol then posted a photo of the staple on his Twitter account, presumably after wrenching it out from his granite brow as soon as the final whistle sounded… 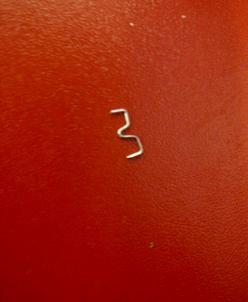 We’re not entirely sure if that’s a pool of blood or just a red table.

Spotted over on Dirty Tackle, image via @Carles5puyol