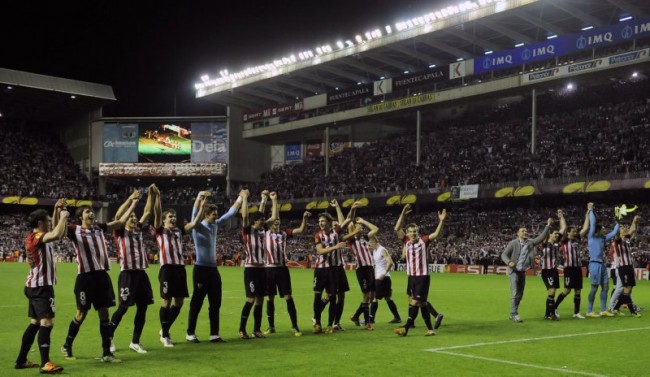 An 89th minute Fernando Llorente toe poke was enough to see Athletic Bilbao through to the Europa League Final in Bucharest on 6th May, overturning Sporting’s 2-1 lead from the first leg in Lisbon last week.

A rip-snorting first half saw Athletic open the proceedings through Markel Susaeta, Llorente bringing down a cross with his chest and stepping aside for the little winger to lash home.

Ricky van Wolfswinkel then drilled in an equaliser for Sporting a minute before the interval, though Bilbao still managed to nudge themselves ahead again before the whistle sounded – the beastly Llorente controlling, turning and laying an exquisite ball into the path of Ibai Gomez in one fluid sequence, Gomez capping it off by sliding in to lift the ball over the sprawling Rui Patricio.

With Llorente the planet at the centre of the vacuum and Susaeta, Herrera, Muniain and Ibai the flitting moons caught in his orbit, Bilbao were an absolute joy to behold in the first 45 – much as they have been for the majority of the tournament – though the second half was largely pretty turgid.

With the aggregate score level, the feigning, tumbling and time-wasting quickly began to set in from both sides. Extra time seemed like a crushing inevitability as the match slouched on but, with less than 90 seconds of normal time left to wick away, Llorente beat his man to a cross and poked a shot in off the inside of the near post to send both the San Mames into delirious rapture and Bilbao through to Bucharest.

Said Llorente after the game:

“This is incredible. It’s the first time that I have wanted to cry on the pitch. This is beyond words. This is the best.

“We made history, and I hope we continue to do so in the final, which I hope we can win because these players and these fans deserve it.”

Given the decibel level in The Cathedral all evening, it’s hard to disagree.