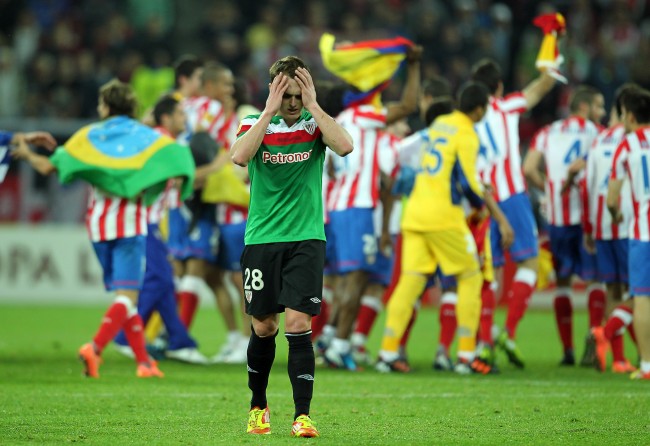 Within the magnificent confines of the National Arena in Bucharest, Atletico Madrid won their second Europa League in the space of three years with a domineering victory over Bilbao, with hot-to-trot striker Radamel Falcao pivotal in reducing vast swathes of Marcelo Bielsa’s darlings to tears come the final whistle.

Two gorgeous Falcao goals in the first half-an-hour or so; the first a sweet, caressed curling effort, the second a cute ‘drag-back and lash’ from the edge of the six-yard box; put Madrid on course, with a rigid Bilbao side routinely failing to make anything stick.

Given our only exposure to Bilbao has been their sublime Europa League run this season, the yawning schism between their showings on the continental stage and their relatively lowly La Liga standing suddenly began making more sense. They ran out of ideas after 35 minutes, with Madrid’s deep, disciplined central midfield constipating and constricting through the middle while feeble crosses from the flanks continually failed to reach the crowded Fernando Llorente.

Truth be told, there only ever looked like being one winner: ¡Aupa Atleti!

Just a word on Falcao; the Colombian has now lifted the Europa League trophy twice on the bounce with two different teams (Atletico Madrid and Porto) making him the first ever player to do so. He’s also topped the tournament’s scoring charts both times (with 17 and 12 goals respectively).

He’s quite the commodity. You want a Europa League winning? Just give Radamel a call.