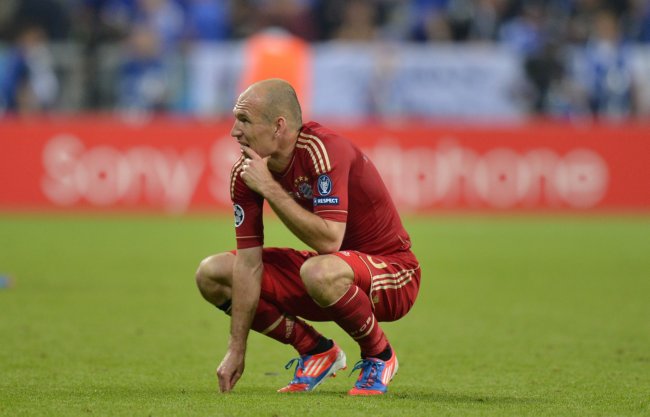 Last night Bayern Munich played Holland in an unfortunately timed and largely meaningless friendly at the Allianz Arena which was set up in order to compensate the German side for the hamstring twang that Arjen Robben aggravated at the 2010 World Cup – an injury which forced him to miss the first two months of the following season, despite Bayern pleading with the KNVB not to play him in South Africa.

Robben, who you may remember missed a fairly important penalty at the weekend, came on as a second half substitute for his country, and was duly booed, heckled and harrassed by large sections of the Bayern crowd every time he touched the ball…

It was all a bit unnecessary and Holland’s captain Mark van Bommel was suitably unamused with the atmosphere at the Allianz, telling SBS6 after the game that Robben should just up-sticks and vamoose due to the flack he’s had at Bayern over the years:

“It’s a disgrace. When you look at what Robben has achieved in his career. He led Bayern to the final at Madrid and is so important to the club. Bayern should be really happy to have a player like him.

“Nobody from the club supports him, I’m the only one that supports him in the press. Mentally he is very strong. Everytime something bad happens to him, he comes back stronger.”

Rafael van der Vaart was similarly unimpressed, telling Bild that Bayern ‘should be ashamed’ about their fans’ ’embarrassing’ conduct.

Ooer missus. I’m sure we’d be able to drum up a modicum of sympathy if Robben didn’t continually make it so very hard to empathise with him. Ah well.