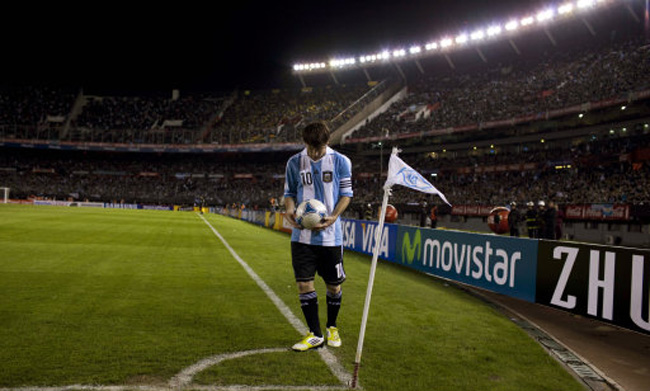 While Europe prepares for Euro 2012, across the Atlantic in South America, they are already battling it out for a place in the 2014 World Cup in Brazil.

While Uruguay could only draw 1-1 at home to Venezuela on Saturday, Chile won 2-0 away at Bolivia. However, the biggest win of day came courtesy of Argentina, who put four past Ecuador.

Man City’s Premier League-winning hero, Sergio Aguero, opened the scoring on 20 mins before Gonzalo Higuain and some bloke called Lionel Messi made it 3-0 before the break. Higuain’s fellow Real Madrid attacker Angel Di Maria wrapped it up late on to give La Albiceleste a decent 4-0 victory.

Man Utd’s Antonio Valencia played but couldn’t do anything about his team’s thrashing.

Messi, Aguero, Higuain, Di Maria, Lavezzi, Tevez, Pastore…. If only Argentina had some decent defenders to match their forward line, they’d be unstoppable.