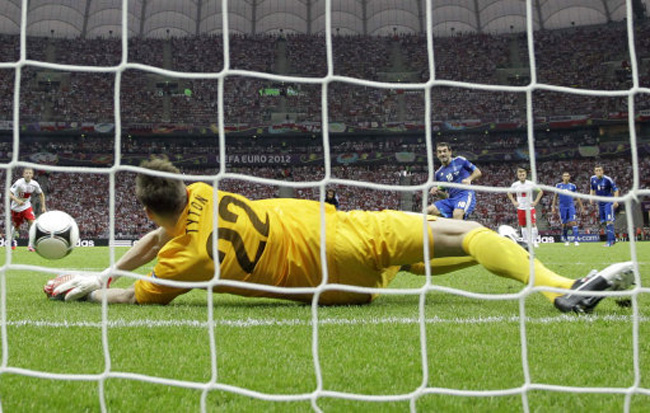 With both sides neither scoring many or conceding a lot in the run up to the tournament, you could have been forgiven for not expecting too much in the way of drama as co-hosts Poland faced Greece in the Euro 2012 (Group A) opener. But how wrong you’d have been you big eejit! Instead the game had everything!

Poland dominated the first half, with the Dortmund trio of Robert Lewandowski, Łukasz Piszczek and national team captain Jakub Błaszczykowski runnin’ tings. In-demand hitman Lewandowasi opened the scoring on 17 minutes after Greek ‘keeper Kostas Chalkias had gone walkabout in the box. Referee Carlos Velasco Carballo then proceeded to have a howler of his own, sending off Sokratis Papastathopoulos for two very very very soft fouls.

However, after the break it was Polish goalie Wojciech Szczesny’s turn to bugger it up, failing to deal with a right-wing cross, with Greek sub Dimitris Salpingidis firing home. The Arsenal ‘keeper’s day then went from bad to worse when he tripped the impressive Salpingidis in the box, thus receiving his marching orders. However, Greek legend Giorgos Karagounis saw his resulting spot- kick saved by sub ‘keeper Przemyslaw Tyton. The drama!

Greece then pushed for the winner as the Poles failed to rediscover their first-half mojo, but ultimately the game would end in a 1-1 draw. Phew!

While both goalkeepers and the ref had poor games, even they couldn’t match BBC pundit Mark Bright’s appalling commentary. Bring in Fearne Cotton to replace him, I say.