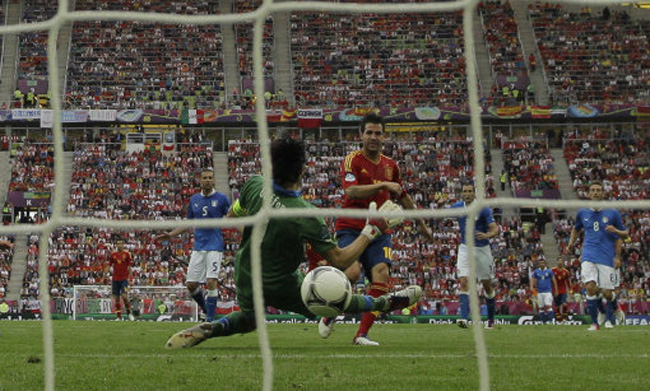 In a move that would have rather irked the likes of Fernandos Llorente and Torres, Spain boss Vicente Del Bosque decided to eschew a natural centre-forward in his line-up against Italy, instead opting to allow attacking midfielders Cesc Fabregas and David Silva to float between attack and midfield.

This decision lead to much debate about the ‘false 9’ role. Too much bloody, geeky over-analytical debate, in my book. ‘False 9’ my backside – it’s simply a striker who drops deep (or a midfielder who plays further forward). If a manager decided to play an outfield player as a goalkeeper, would he be called a ‘false 1’? No he wouldn’t. So there. End of. Rant over.

Anyway, after Mario Balotelli had made a right balls of a fabulous chance in the second half, the Man City man was replaced by Udinese veteran Antonio Di Natale, in what was to prove a genius decision by Cesare Prandelli. Put through exquisitely by the legendary Andea Pirlo, the pint-sized hitman netted to put Italy a goal up. However, Mr ‘False 9’ himself, Fabregas, equalised almost immediately, after being put through by David Silva.

Sub Fernando Torres then resorted to his old (rubbish at Chelsea) self, messing up three decent chances to win the game for La Roja. Still, a fair end to a superb game of football.