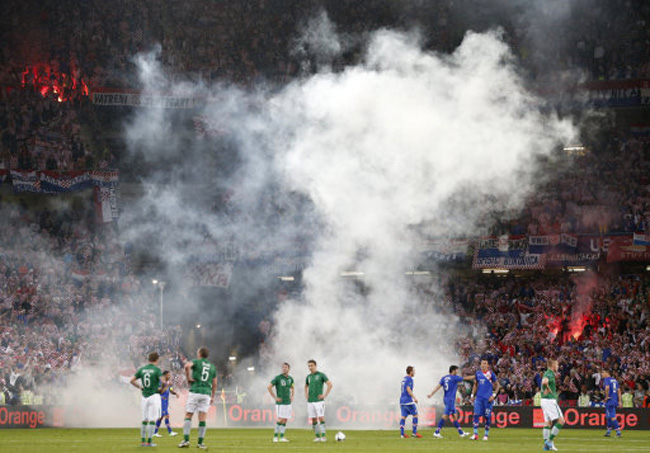 Ireland’s famous defensive resolve was nowhere to be seen on Sunday evening in Poznan, as the Boys in Green failed to deal with an impressive Croatian attack.

Star of the show, Mario Mandzukic, had already got on the scoresheet after just three minutes, when his header beat a rather flat-footed Shay Given in the Ireland goal. However, driven on by a massive Irish crowd, Giovanni Trapattoni’s men got themselves back into the game, courtesy of a Sean St Ledger header.

However, just before the break, the Croats’ superiority (and Ireland’s rubbish defending) came to the fore again, with Everton striker Nikica Jelavic firing home from close-range after a dreadful sliced clearance from Stephen Ward. As the cliché goes, it was indeed a terrible time to give away a goal and the Irish never recovered.

Slaven Bilic’s men, technically on a different planet to the Irish, made it 3-1 soon after the re-start, when Mandzukic’s effort came back off the post only to hit Given ‘s head and end up in the back of the Irish net.

Trap threw on Simon Cox, Shane Long and Jonathan Walters, but despite their best efforts (and a foul on Robbie Keane in the box which warranted a penalty), the Boys in Green were always second-best.

Prior to the tournament, it was predicted that a win, a draw and a defeat would get the Irish through to the knockout stages, so I guess that’s the defeat out of the way!