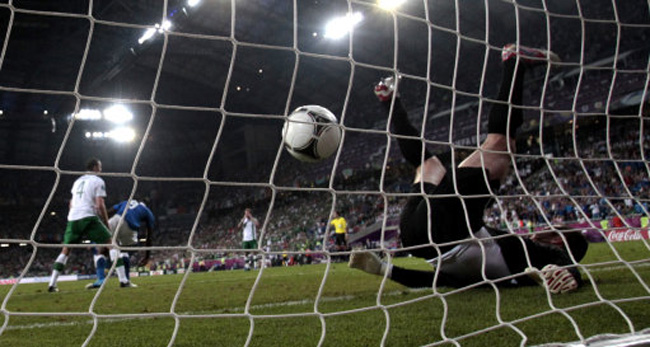 Italy made it through to the quarter-finals of Euro 2012 after a decent, if nervy, display against Group C whipping boys Ireland.

To be fair to the Irish, they put on a much better display in this, their last match in the competition before they tootle off for their summer hols. However, more defensive sloppiness eventually allowed Italy to take the lead on 36 minutes, with striker Antonio Cassano nodding home from a corner.

Giovanni Trapattoni sent on Shane Long and then Jonathan Walters in the second-half, with those two giving the Irish frontline a bit of much-needed pace. However, an equaliser never came. Instead, mad Mario Balotelli, on as a sub, fired home a fine semi-overhead kick to secure the win for the Italians. The City loon tried to gesture towards Cesare Prandelli, no doubt to complain about not starting, but was sensibly kept quiet by his team-mates.

Keith Andrews became the third player at the finals to be sent off, receivng a second yellow after what looked like an innocuous challenge.

With Croatia losing against Spain, Italy’s victory put them through to the last eight where they’ll prove a handful for anyone. Poor old Trap and Ireland, on the other hand, need to put a few of the older players out to stud (not literally) and focus on the limited but decent young talent coming through.