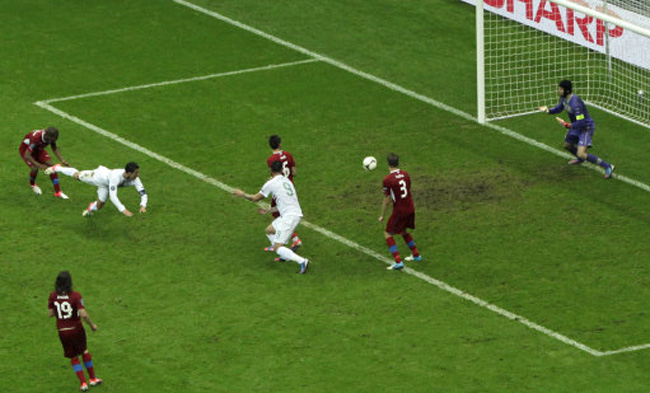 There’s something quite satisfying about seeing a top class player live up to the hype at a major tournament – be it Maradona in ’86, Zidane at ’98 or (the Brazilian) Ronaldo in ’02. And while the world’s number one player, Lionel Messi, is yet to explode all over a World Cup or Copa America, his nearest rival, Cristiano Ronaldo, is starting to hit those stratospheric heights at Euro 2012.

The Real Madrid man was outstanding against the Czech Republic in the first quarter-final, firing in shot after shot, ably supported by the outstanding Joao Moutinho in midfield. Despite totally dominating a game in which the Czech Republic, shorn of injured captain Tomas Rosicky, failed to muster a single shot on target, it took until the 79th minute for the Portuguese to finally break the deadlock, courtesy of a superb header from Ronaldo himself.

A semi-final date with either Spain or France awaits. But with their star player in fantastic form, Portugal will fear no one.