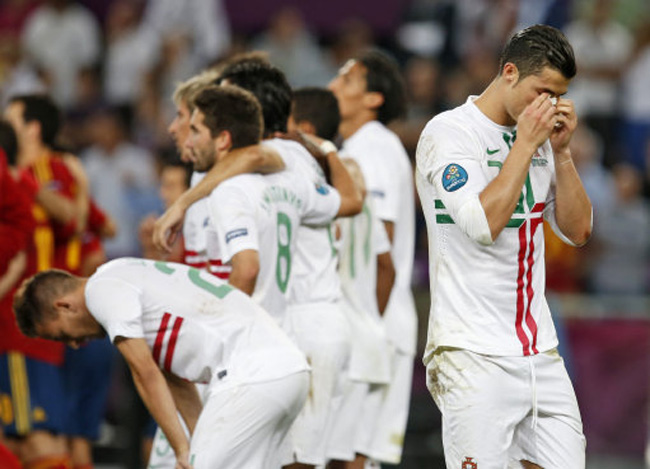 As Portugal went out on penalties to Iberian rivals Spain in Donetsk, the question on everyone’s lips was why the hell was Cristiano Ronaldo no. 5 on the list of penalty takers for Paulo Bento’s losing side? In the end, the superstar didn’t even get a chance to take one, as Bruno Alves saw his shot crash off the crossbar before Cesc Fabregas netted the deciding spot-kick (going in off the post).

For the first 90 minutes, the Portuguese were marginally the better side, with Spain struggling to get their passing game going and Alvaro Negredo struggling up front. However, clearcut chances were few and far between and as the game moved into extra-time, the World and European champions started to turn the screw.

However, with the scores at 0-0 after 120 minutes, another penalty drama ensued, with Xabi Alonso missing the first, Joao Moutinho then missing his before Andres Iniesta, Pepe, Gerard Pique and Nani all converted theirs. Then, in a moment of pure confident genius, CENTRE-HALF! Sergio Ramos replicated Andre Pirlo’s cheeky chippy penalty to make it 3-2 to Spain. Man mountain Alves, who had mistakenly walked up to take his side’s third before Nani took it, then blasted his spot-kick off the woodwork before Fabregas scored the winning penalty.

A fair result? Not sure about that. It was extremely even over the course of 120 minutes, so neither team really deserved to lose.

Still, the decision to let two central defenders take penalties before Ronaldo remains a quite bizarre tactic (and one which backfired badly) by manager Paulo Bento.

Spain, however, will need to play far better if they are to beat either Germany or Italy in the final.