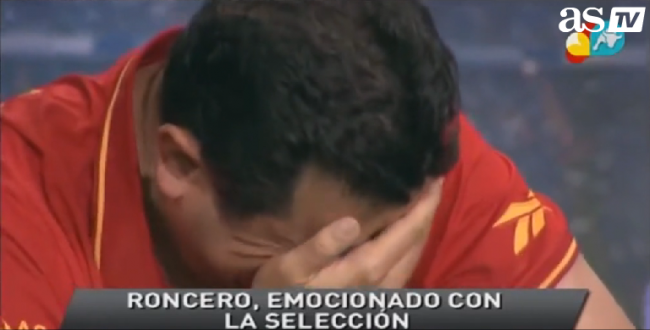 Where on English terrestrial television we get ponderous golf club chatter and wibble-wobble Brummie slurring, in Spain it would appear that post-match punditry is an altogether more visceral affair – case in point being AS journalist Tomas Roncero’s attempts to sum up Spain’s performance in Wednesday night’s Euro 2012 semi against the Portuguese.

Our Spanish ain’t exactly what you’d call bueno, but as Roncero whips himself into frothy lather over the intrinsic beauty of Sergio Ramos’ ‘Pirlnenka’ penalty it all gets too much. Tomas’ internal pressure reaches a critical level and his tear ducts are the first thing to blow, before the poor sod is reduced to wordless whimpering.

Unfortunately due to a lack of embedding you’ll have to venture outside of the safe confines of Pies’ sugary walls and watch the video over on the AS website.

(Thanks to Pies fan @Pp_lake for the nudge)