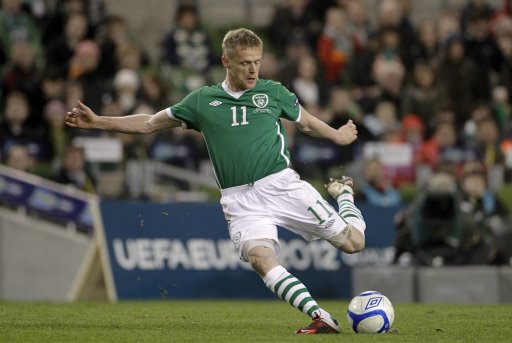 A terrific little player, Damien Duff has decided to hang up his boots for the Republic of Ireland after picking up his 100th cap at Euro 2012. The move by the 33-year-old comes hot on the heels of Shay Given’s decision to do the same.

The gifted wideman has enjoyed a fantastic club career with Blackburn, Chelsea, Newcastle and his current club, Fulham, although it’s probably fair to say that he never quite hit the heights that his talent, back at the turn of the millennium, hinted at.

Initially touted as ‘the new Liam Brady’, his performances for the Republic were a bit hit and miss, to be honest, although his contribution to the Boys In Green still is deserving of much praise.

On making the decision to quit, Duff said:

“I found it very difficult to make this decision, not least for the respect in which I hold Giovanni Trapattoni. I have enjoyed so many good times in the green jersey and want to thank everyone involved, especially the fans, for making the last 14 years so special.”

“I want to wish Giovanni, Marco (Tardelli) and everyone involved with the Irish team every success for the future and will be supporting them every step of the way.”

Making his debut for the senior Irish side in 1998, Duff went on to score eight goals in 100 appearances for the Boys In Green, with his finest moments arguably coming back in the World Cup in South Korea 2002. Take a look at this video of his best moments against Spain in that very tournament. Magical!