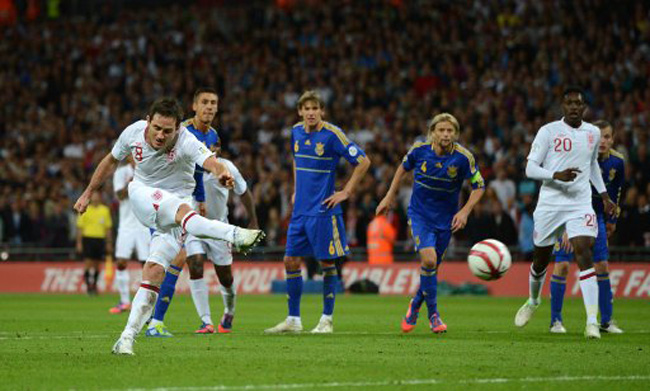 Shorn of Wayne Rooney, Ashley Cole and John Terry amongst others, Roy Hodgson’s England put on a rather poor performance in their second World Cup 2014 qualifier on Tuesday night.

England’s Cesc Fabregas, aka Tom Cleverley, hardly shone in the No. 10 role, missing two good chances and pulling not a single string. Stevie G hit the usual plethora of Hollywood balls and was eventually sent off for two bookables while Alex Oxo-Chamberpot was a spectator for most of the game.

Ukraine, on the other hand, were sharp, neat and tidy, a technical level above the home side and deserving of at least a point. Their goal was a stunner too, coming courtesy of a magnificent  Yevgeni Konoplianka drive on 39 minutes. However, the visitors failed to get a second goal, and ultimately, at the death, Frankie Lamps walloped home a penalty after a handball in the box to square the game.

Not a good omen for the rest of the campaign for Roy and co.