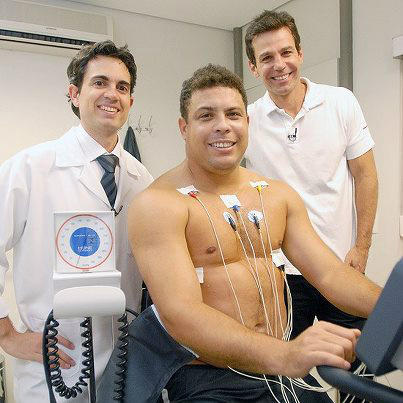 In a bid to shift some of the flab and a couple of the chins he’s acquired since knocking his playing career on the head once and for all, Ronaldo has signed up to appear on the latest series of the Brazilian equivalent of ‘Celebrity Fit Club’ – weighing in at an impressive 118kg (that’s around 261 pounds for our antiquated imperial American readers).

“I’m enjoying participating in the program, because it is an incentive for me to lose weight.

“Maybe if I didn’t have the pressure of everybody watching me trying to lose weight then I wouldn’t be able to do it.

“All I can say is that I will work hard, be persistent and not give up until I reach my recommended weight. I want people to be inspired by me.”

Now, Pies are certainly not one’s too talk in the ‘Fatty Boom Boom’ department, seeing as though we seem to resemble a partially deflated bouncy castle these days, so good on Ronaldo for wanting to reclaim some of his athleticism.

Apparently he’s signed up for the TV show it in order to shape up for one of Zinedine Zidane’s charity games in a couple of months, so all the best to him on that front.