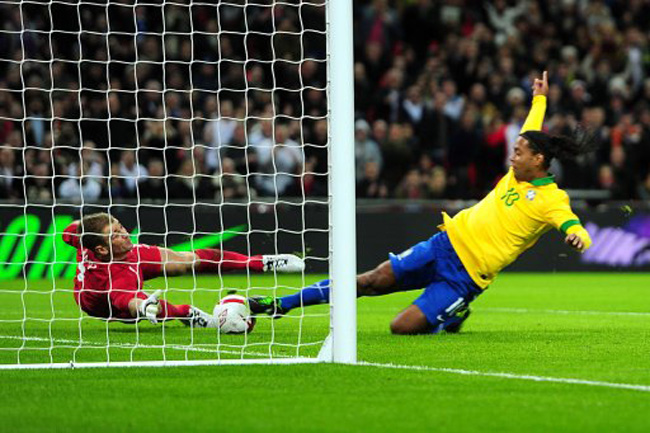 Yes it was only a friendly and yes it really doesn’t mean that much, but still, credit where credit is due – England performed superbly on Wednesday night against an almost full-strength Brazil side (although where was Andre Santos?).

With Ashley Cole earning his 100th international cap and Steven Gerrad partnering Frank Lampard in a retro-Golden Generation midfield, it was definitely England’s night. However, the star of the show for Roy Hodgson’s side was Arsenal’s Jack Wilshere, who was outstanding in the centre of the park.

The pint-sized schemer poked, prodded and got stuck in throughout the 90 minutes and was the creator of England’s opening goal, setting up Theo Walcott courtesy of a lovely pass before Wayne Rooney fired home from Julio Cesar’s save. That goal had come after Joe Hart had superbly saved a Ronaldinho penalty, as well as the follow-up.

Unfortunately for England, after the break, Gary Cahill suddenly thought he a Brazilian star too, and tried to dribble the ball out of defence, only for Fred to ultimately capitalise on the error with a fine finish.

However, Frankie Lamps put the home side back in front on the hour-mark, courtesy of a sweet finish. That goal came after good work from Walcott, who terrorised Adriano down the flanks in the second period.

Chelsea’s Oscar and PSG’s Lucas did their best to get the Brazilians back into the game while Neymar rather failed to live up to the hype, missing an open goal in the first period.  However, ultimately it was the Three Lions who would secure a nice little win against a traditional big gun.

Throughout the game, except for a few defensive lapses, England were organised and efficient and with Wilshere, Gerrard and Tom Cleverley and then his replacement Lampard in midfield, they held on to the ball well and used it intelligently.