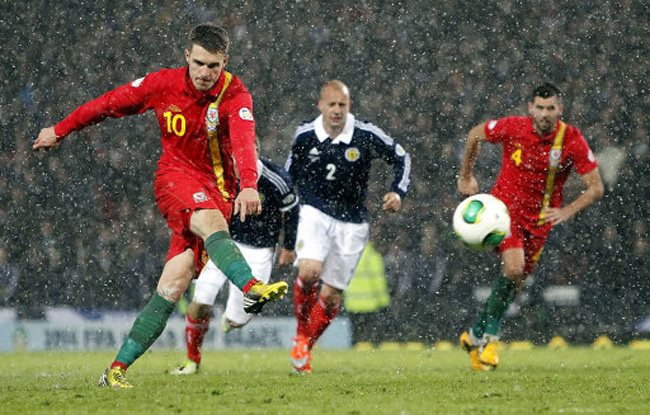 Aaron Ramsey has endured a difficult couple of years. Since coming back from that horror leg-break, he has struggled to hit the heights expected of him, instead struggling to secure a regular place in Arsene Wenger’s inconsistent Arsenal side. The poor bugger was even stripped of the Wales captaincy by new boss Chris Coleman.

However, against Scotland on Friday night, the former Cardiff man produced an impressive display in midfield, helping his side to come from a goal down. Ramsey netted the equaliser from the penalty spot before, at the death, taking one for the team when he was sent off after hauling down James McArthur who was through on goal.

Grant Hanley had put the Scots 1-0 up on the stroke of half-time but the sending off of Robert Snodgrass in the second period for a second yellow changed the game, with Ramsey blasting home the resulting penalty. Reading’s Hal Robson-Kanu made it 2-1 late on to give Chris Coleman and co. a previous victory.

Oh, and Gareth Bale had to go off at half-time. Cue panic at White Hart Lane.

Here’s the table. It’s not looking great for Scotland, is it?