Proof, if it indeed were needed, that Eric Cantona has always lived with the madness, even before he kicked that gobby Palace fan in the heart: here he playing for his first professional side, Auxerre, in 1988 – aged 21 – and almost slicing Nantes midfielder Michel Der Zakarian in twain with a bloody horrible flying lunge…

Having already gained a well-deserved reputation for being completely off his rocker (he had already been fined for punching a senior teammate, Auxerre ‘keeper Bruno Martini, in the face), the “assassin tackle” saw Eric suspended for three months – though Auxerre whittled it down to two by telling the FFF that they’d make Cantona unavailable for national team selection if they didn’t agree to lighten the sanction.

Shortly after, having signed for Marseille in the summer of ’88, Eric was banned for another month for taking umbrage at being substituted during a pre-season friendly against Torpedo Moscow and retaliated by lumping the ball into the crowd before taking off his shirt and throwing it on the ground in utter disgust. 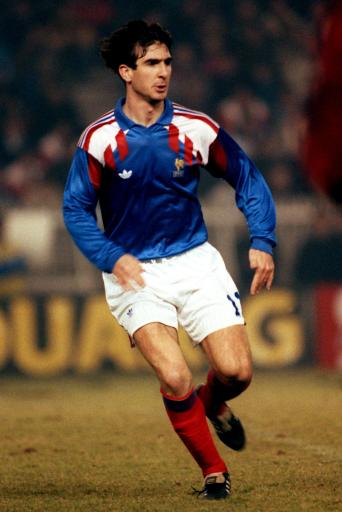 This all came a few months after Cantona was banned from all national team games for a year for calling coach Henri Michel a “bag of shit” during a live post-match television interview for having the temerity to drop him. The ban stood until Michel was sacked and Michel Platini took over, duly making the reinstatement of Cantona his first order of business.

Next up, while playing for Nimes in 1991, Cantona hurled a ball at the referee after being cautioned for what he deemed a minor infraction and was banned for one month, though the suspension was immediately increased to three months when he marched up to the FFF’s disciplinary panel at the hearing and called each and every member an idiot to their faces.

Never one to let “the man” get the final word, he then retired from international football (for the first time) at the grand old age of 25.