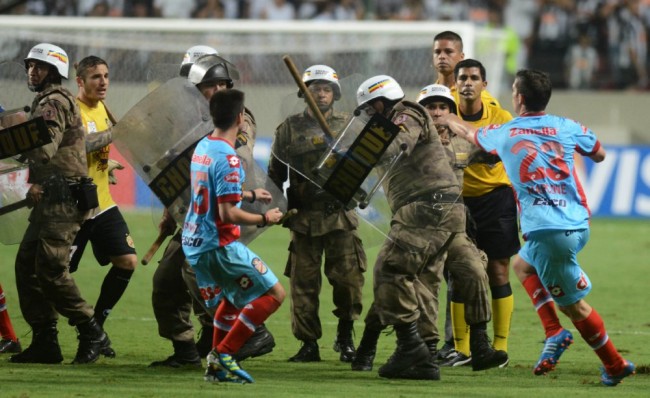 Last night’s Copa Libertadores group stage fixture between Brazil’s Atletico Mineiro and Argentina’s Arsenal de Sarando ended in time-honoured South American fashion: with shotguns being toted after the away side, a tad angry at having been soundly trounced, took their anger out on the match officials and the armed riot police sworn to protect them.

After Ronaldinho scored twice in a 5-2 win for the Brazilian side, Arsenal players swarmed around the referee and his assistants at the final whistle to air their grievances, only for the local riot police to form a protective perspex shield around the officials.

Instead of calling time on their collective hissy fit there and then, a few of Arsenal’s more misguided players proceeded to lash out at the police, kicking and hoofing a football at the security forces until they began wielding their pellet shotguns in an unmistakable “right, we’ve had enough now” kind of way…

Highlights of the actual football…