With PSG 1-0 through Javier Pastore and already down to ten men following the dismissal of Marco Veratti for two yellow cards, David Beckham managed to get himself sent-off in inury time against Evain yesterday despite only having been on the pitch for six minutes.

Beckham replaced Jeremy Menez for the closing moments, but went in a bit “stampy” on Evian striker Youssef Adnane as the clock ticked over into the 93rd minute and saw a direct red for his troubles…

Bit of a naff red if you ask us, but you can see why the referee deemed the “stamp” motion to be violent conduct. It’s also possible that, from his vantage point and from the player’s ludicrously overwrought reaction, the ref thought Becks ran a stud down the Evian man’s shin/ankle.

We reckon Becks himself may have been a little taken aback by the decision, if only for the look on his face as the ref pulled out the rouge… 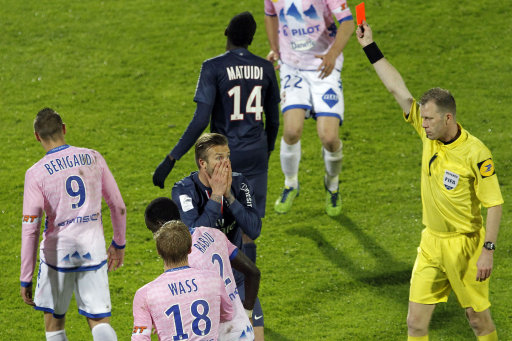 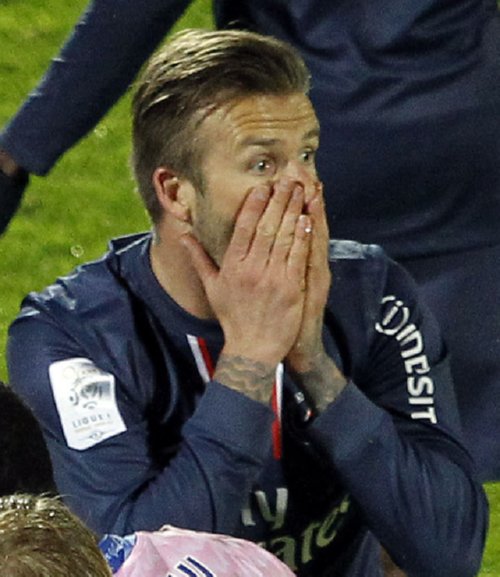 For the record, PSG keeper Salvatore Sirigu and Evian’s Saber Khelifa were also shown red cards after the final whistle, though the result leaves the Parisien’s nine points clear at the top of Ligue 1 with just four fixtures remaining.